Doug Routley was born on May 9, 1961 in New Westminster, BC and grew up in Duncan, BC. Doug is an Island boy who understands the unique challenges and opportunities of life in the region and his diverse experience gives him a very close and practical grasp of what his constituents care about and how their needs can best be met.

Doug comes from a family of educators and attended the public schools of the Cowichan Valley. He also attended Camosun College before traveling to Japan, where he lived and worked for one year.

Doug’s work experience is diverse and gives him a very broad understanding of so many of his constituents’ lives and challenges.

While in Japan, Doug taught English and studied Sumea, traditional Japanese ink painting. He was a bicycle racer and while training in Japan, met a renowned Japanese bicycle manufacturer. Doug became English teacher to the family of this bicycle manufacturer and was given North American rights to his products.

After his return to Canada, Doug established a bicycle sales and distribution company with a retail bicycle store in Vancouver and a wholesale/distribution chain with dealers throughout Canada and the USA with warehouses in Vancouver, Ontario and California.

Doug is still an avid cyclist, riding average of 1000 km per month. Doug is a member of the BC Masters Cycling Association and races occasionally. In 2012, he also participated in the 140km Ryder Hesje 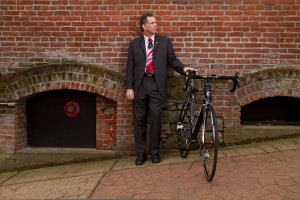 As a school board employee, Doug worked as a custodian for seven years and then became the elected chairperson of his employee group within the Steelworkers Union. He then successfully ran to become a board member of his union’s local executive and was appointed to the Steelworkers national safety committee. Doug is proud of his campaign to bring awareness to the dangers of 15 passenger vans and his role in several contract negotiations.

As a school trustee, Doug was a defender of standards and advocate for improved services to students. He served on numerous. board committees, including the Education Committee, Finance Committee and Bursary and Scholarship Committee

Doug was also a member of the Cowichan Valley Regional District Community Safety Advisory Committee.  As school board representative, Doug participated in community planning and advisories regarding safety, accessability and inclusiveness.

Doug lives with his partner, Leanne Finlayson and he has a daughter, Madeline, step-son Matthew and step-daughter Brooklynne. The family enjoy cycling, hiking (with Husky dog Kato), camping and boating together.

Stay informed of what's happening in the community