How is old growth defined in B.C.?

In British Columbia, the term “old growth” is officially defined by the age of trees in a forest using specific thresholds. On the Coast old growth is defined by trees that are over 250 years and 140 years old in the Interior.

We recognize that there are differing opinions of how Old Growth is defined and this is something we are committed to addressing while we continue to build a new Old Growth Strategy in B.C.

How much old growth forest is there in B.C.? 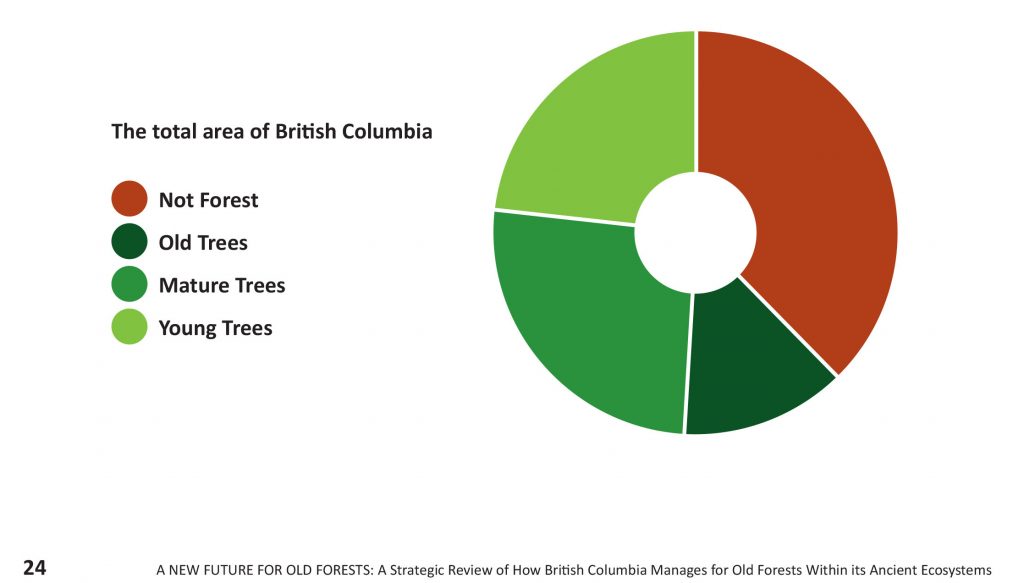 How much of the 13.2 million hectares are at risk of being logged?

10 million hectares is not available to harvest (either under official protection or in being considered uneconomical to harvest) and 3 million is available for harvesting.

*Non THLB non protected represents areas that are not under official protection but that are not considered viable for harvesting and therefore are not at risk of being logged.

Is it true that timber licenses for old growth have increased 43% this year?

This is false. This analysis double-counted some areas and failed to account for a data clean-up where historical records added for auditing reasons were included in the 2020 numbers – even though those permits had been completed years earlier.

Why don’t you support a full moratorium on old growth?

We are committed to implementing all 14 recommendations of the Old Growth Strategic Review. It’s important to note that the Old Growth Strategic Review did not recommend a moratorium on old growth harvesting. The recommendations do focus on protecting more old growth while putting Indigenous peoples, who are the title holders, at the center of land management decisions in their territories.

What have you done since the report was released? Are you taking any immediate actions?

We committed to implementing all 14 recommendations of the Old Growth Strategic Review – which contains both immediate actions, and long-term actions.

Listed as the top priority under immediate response it states “Until a new strategy is implemented, defer development in old forests where ecosystems are at very high and near-term risk of irreversible biodiversity loss”

As a first step, government engaged with the First Nations Leadership Council to discuss the report and begin work on the approach for recommendation No. 1: “engaging the full involvement of Indigenous leaders and organizations to review the report and work with the Province on any subsequent policy or strategy development and implementation.” Since the report’s release, government has met with several Indigenous Nations and organizations to work together on recommendations and will continue to reach out to more Nations.

Through these initial discussions we were able to immediately deferrals of 200,000 hectares in nine of the rarest, at-risk ecosystems. These areas and deferrals were done in consultation with 9 First Nations. We are currently undergoing consultation with the more than 200 First Nations in B.C. to identify additional areas that can be deferred, and more deferrals soon.

The Premier has also stated that First Nations can also proactively apply for deferrals if they, for example, have immediate concerns about a specific area, or have already identified areas they want to see immediately protected. At this time no deferral request from a First Nations has been denied.

These deferrals help stop harvesting in at risk areas while we develop a more long-term plan. The Old Growth report calls for Indigenous involvement and leadership at every step and we are committed to meaningful engagement with all nations as we develop a new way of managing our forests.

This Panel will build on initial technical work by government and others to provide maps, analysis and detailed information on the status of old growth forest ecosystems in B.C. This work will be critical to improving public information on old growth, consistent with Recommendation 5 from the Old Growth Strategic Review and will help inform government-to-government decisions with First Nations on future deferral areas. Decisions on specific deferrals will continue to be made at a government-to-government level with First Nations rights and title holders.

The technical panel will also provide recommendations and advice on priority areas for development of deferrals that will aid in government-to-government engagement. This work addresses a priority recommendation of the independent strategic review panel on old growth – Recommendation 6 – to defer development in old forests where ecosystems are at very high and near-term risk of irreversible biodiversity loss, until a new strategy is implemented.

In response to Recommendation 6: “Until a new strategy is implemented, defer development in old forests where ecosystems are at very high and near-term risk of irreversible biodiversity loss,” harvest has been deferred in 11 areas of old growth throughout B.C. The most recent deferrals include those in the Fairy Creek watershed and central Walbran area, initiated at the request of the Pacheedaht, Ditidaht and Huu-ay-aht First Nations. Work is ongoing to identify additional deferral areas throughout the province.

Key timelines for addressing the recommendations of the old growth independent panel report can be found online:
https://www2.gov.bc.ca/assets/gov/farming-natural-resources-and-industry/forestry/stewardship/old-growth-forests/old_growth_path_forward.pdf

I’ve heard that the 200,000 hectares of deferrals is not an accurate figure, or they are in areas that are not at risk of being logged?

These areas were selected because they represent some of the rarest, at-risk ecosystems. Some were at more immediate risk than others, but all were vulnerable to logging at some point. These are also areas that were identified by local First Nations.

For example, the BC Liberals had issued a license to cut in the Skagit “Donut Hole” inside Manning Park. We cancelled that. We also protected the remainder of vulnerable old growth in Clayoquot Sound.

This is just the start.  Following ongoing engagement with Indigenous rights and title holders, and guided by science, more deferrals will occur this summer.

Why can’t you just defer everything now while you consult?

The days of making land management decisions without Indigenous peoples are over. That means we will meaningfully consult with rights and title holders before making decisions – including on deferrals.

All First Nations have the inherent right of self-determination and are uniquely positioned to be stewards of their territories. We cannot assume to know the wishes of every one of the more than 200 First Nations in B.C. – each nation deserves to have meaningful consultation before any changes are made and that is what we are doing.

The panel’s suggested timeline was developed before COVID 19 and was not intended as a deadline. The panel recognized the complexity of the issue, the need for engagement, and that the economic impacts of its recommendations need to be analyzed.

Over the past six months, vital work has been done on old growth during a global pandemic. We’ve started high priority work in keeping with the report’s recommendations. But it will take engagement with the full involvement of Indigenous leaders, organizations, industry, and environmental groups to find consensus on the future of old growth forests in B.C.

What have you committed to protecting in Fairy Creek?

The Province is honouring the request of the Pacheedaht, Ditidaht and Huu-ay-aht First Nations and deferring old-growth harvesting in the Fairy Creek watershed and central Walbran areas in their territories.

The deferrals follow a request made by the Pacheedaht, Ditidaht and Huu-ay-aht First Nations, who issued the Hišuk ma c̕awak Declaration on June 7, 2021. The deferrals protect all old growth in the Fairy Creek watershed and the central Walbran area – spanning over 2,000 hectares – for two years while the First Nations title holders build resource-stewardship plans for their lands.

Under these deferrals, all old growth – approximately 2,034 hectares – in the Fairy Creek watershed and central Walbran area will be protected.

Maps of the deferral areas in the Fairy Creek watershed and central Walbran area are available here: https://news.gov.bc.ca/files/FairyCreek_Walbran_map.pdf

What exactly does this deferral mean? Will road building continue?

In accordance with the request from the Huu-ay-aht, Ditidaht and Pacheedaht First Nations, tenure holders in the Fairy Creek watershed and the central Walbran area will be able to harvest timber in areas not identified as old growth.

New road construction activities will be suspended within identified old growth areas in the central Walbran and Fairy Creek watershed as part of the deferrals. For existing roads in these areas, government and the three Nations expect tenure holders to carry out necessary maintenance to make sure roads are safe and that there is an appropriate level of environmental protection.

Are you directing police to arrest people & block media? Why won’t you stop them?

In our democratic system, elected officials do not have the ability to direct police or the court system. In this case, the private company sought an injunction from a court and won. The Police have been ordered by the BC Supreme Court to ensure compliance with the court order, while recognizing lawful, peaceful protests and simultaneously ensuring the ability of industry to complete its court-approved work.

Enforcement action by the RCMP in response to the court decision is an operational matter for the RCMP and is entirely at arms length from government.

How can someone make a complaint against enforcement action:

For the public to have confidence that police are held accountable, there are processes in place where people can take their concerns or complaints.  With regards to enforcement action in Fairy Creek, complainants have options for pursuing their concerns about the conduct of the RCMP:  the RCMP “E” Division can be contacted directly, or complaints can be made to the Civilian Review and Complaints Commission for the RCMP (CRCC*) at www.complaintscommission.ca.

*The CRCC is the independent agency that ensures that complaints made by the public about the on-duty conduct of an RCMP member(s) are examined fairly and impartially. The CRCC is actively reviewing incoming complaints related to the Fairy Creek protests.

There are no upcoming events.

Stay informed on what's happening in your community